Reverse osmosis (RO) is a water purification technology that uses a semipermeable membrane. This membrane technology is not properly a filtration method. In reverse osmosis, an applied pressure is used to overcome osmotic pressure, a colligative property, that is driven by chemical potential, a thermodynamic parameter. Reverse osmosis can remove many types of molecules and ions from solutions, and is used in both industrial processes and the production of potable water. The result is that the solute is retained on the pressurized side of the membrane and the pure solvent is allowed to pass to the other side. To be “selective”, this membrane should not allow large molecules or ions through the pores (holes), but should allow smaller components of the solution (such as the solvent) to pass freely.

In the normal osmosis process, the solvent naturally moves from an area of low solute concentration (high water potential), through a membrane, to an area of high solute concentration (low water potential). The movement of a pure solvent is driven to reduce the free energy of the system by equalizing solute concentrations on each side of a membrane, generating osmotic pressure. Applying an external pressure to reverse the natural flow of pure solvent, thus, is reverse osmosis. The process is similar to other membrane technology applications. However, key differences are found between reverse osmosis and filtration. The predominant removal mechanism in membrane filtration is straining, or size exclusion, so the process can theoretically achieve perfect exclusion of particles regardless of operational parameters such as influent pressure and concentration. Moreover, reverse osmosis involves a diffusive mechanism, so that separation efficiency is dependent on solute concentration, pressure, and water flux rate.[1] Reverse osmosis is most commonly known for its use in drinking water purification from seawater, removing the salt and other effluent materials from the water molecules. 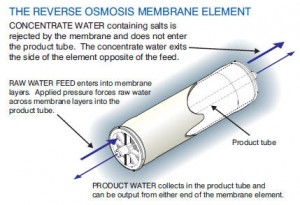 The membranes used for reverse osmosis have a dense layer in the polymer matrix-either the skin of an asymmetric membrane or an inter facially polymerized layer within a thin-film-composite membrane—where the separation occurs. In most cases, the membrane is designed to allow only water to pass through this dense layer, while preventing the passage of solutes (such as salt ions). This process requires that a high pressure be exerted on the high concentration side of the membrane, usually 2–17 bar (30–250 psi) for fresh and brackish water, and 40–82 bar (600–1200 psi) for seawater, which has around 27 bar (390 psi)[4] natural osmotic pressure that must be overcome. This process is best known for its use in desalination (removing the salt and other minerals from sea water to get fresh water), but since the early 1970s, it has also been used to purify fresh water for medical, industrial, and domestic applications.

Water and wastewater purification
Rain water collected from storm drains is purified with reverse osmosis water processors and used for landscape irrigation and industrial cooling in Los Angeles and other cities, as a solution to the problem of water shortages.
In industry, reverse osmosis removes minerals from boiler water at power plants. The water is distilled multiple times. It must be as pure as possible so it does not leave deposits on the machinery or cause corrosion. The deposits inside or outside the boiler tubes may result in underperformance of the boiler, bringing down its efficiency and resulting in poor steam production, hence poor power production at the turbine.
It is also used to clean effluent and brackish groundwater. The effluent in larger volumes (more than 500 m3/d) should be treated in an effluent treatment plant first, and then the clear effluent is subjected to reverse osmosis system. Treatment cost is reduced significantly and membrane life of the reverse osmosis system is increased.
The process of reverse osmosis can be used for the production of deionized water.
Reverse osmosis process for water purification does not require thermal energy. Flow-through reverse osmosis systems can be regulated by high-pressure pumps. The recovery of purified water depends upon various factors, including membrane sizes, membrane pore size, temperature, operating pressure, and membrane surface area.

Food industry
In addition to desalination, reverse osmosis is a more economical operation for concentrating food liquids (such as fruit juices) than conventional heat-treatment processes. Research has been done on concentration of orange juice and tomato juice. Its advantages include a lower operating cost and the ability to avoid heat-treatment processes, which makes it suitable for heat-sensitive substances such as the protein and enzymes found in most food products.

Desalination
Areas that have either no or limited surface water or groundwater may choose to desalinate. Reverse osmosis is an increasingly common method of desalination, because of its relatively low energy consumption. In recent years, energy consumption has dropped to around 3 kWh/m3, with the development of more efficient energy recovery devices and improved membrane materials. According to the International Desalination Association, for 2011, reverse osmosis was used in 66% of installed desalination capacity (44.5 of 67.4 Mm3/day), and nearly all new plants. Other plants mainly use thermal distillation methods: Multiple-effect distillation and multi-stage flash.
Sea water reverse osmosis (SWRO) desalination, a membrane process, has been commercially used since the early 1970
Brackish water reverse osmosis refers to desalination of water with a lower salt content than sea water, usually from river estuaries or saline wells. The process is substantially the same as sea water reverse osmosis, but requires lower pressures and therefore less energy. Up to 80% of the feed water input can be recovered as fresh water, depending on feed salinity. 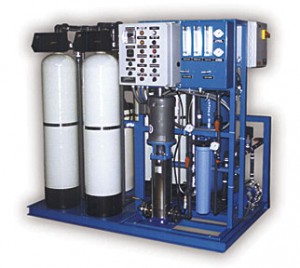